Tamar Saraseh works out o fIndonesia, his work is the true pop art of asia, his motives are spaceous, yet very detailed, he shows us the world through his eyes. The spectator can easily imagine seeing one of his motives as a murial. He has studied art and works as a professor of Art in his township. He exibits firstly in the Asian market, and is delt exclusively through atKinsky die Sammlung Kinsky in Europe and America.The Lucie Cole Foundation in France nominated Tamar Saraseh as artist of the year 2018. He was born in Sumenep in East Java, Indonesia, in 1966.

Tamar works as an art teacher in Indonesia today and is part of a group that builds shelters for homeless kids. His group provides not only food and a home to 0rphant children but he teaches them art.

A huge part of what Tamar earns with his paintings goes into this project.

As he lives in a fairly poor country, some days Tamar deosn not have access to the internet or electricity whatsoever.It is not easy to get to the material you need for your painting he says but he copes well.

I believe Tamar is a diamond and his artwork represents that ofa person who dwells in a life full of art.

I hope you enjoy his paintings as much as I do and maybe you want to purchase one of them? 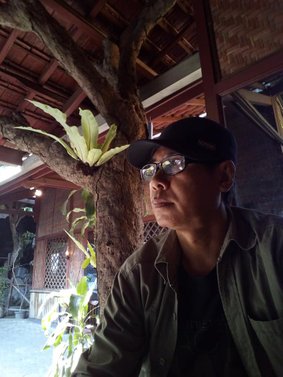 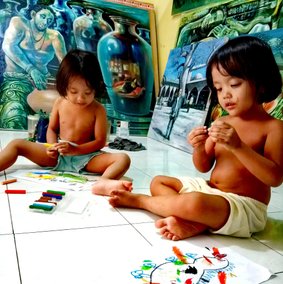 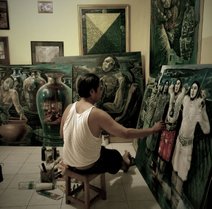 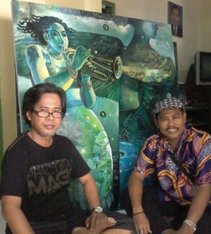 "I will quite happily make you a great offer because I do too support the orphant Childrens Charity that Tamar has founded."

Title: The Song of the Beach