"Stuttgarter Hof Hotel" in 1988. From 1989 to 1990 he was a Member of the production gallery "Untreue" and has taken part in numerous exhibitions with the group "Unwahr".

He is one of the co founders of the artist group "Tacheles" at the Art House "Tacheles in Berlin-Mitte in 1990 and has since made the location the center of his creativity and art work.

From 1991 to 2011 he operates one of Berlins most wellknown Clubs "Zapata" at the Arthouse "Tacheles" and uses it as a base to initiate further art events such as the internationally recognised Art Expo "Werkschau Tacheles and becomes one of the main operators of the Art House as a whole, taking charge of maintenance and development of the location.

in 20 Years he hosts 2000 concerts and over 200 exhibitions. He is also the key figure in the creation of the sculpture garden and open space at "Tacheles" From 1994 to 2011 while he is involved in numerous exhibitions at home and abroad.

In 2011 Ludwig ends his "Tacheles" Era and moves on, now a living legacy to the "Tacheles" story he forms Humboldthain Club in Berlin Wedding, where he begins to work on a new series of paintings he calls "Urban Home" in 2013.

6 years later in 2019 Ludwig Eben presents a vast array of Artworks to an enchanted crowd of followers and art lovers.

Ludwig Eben and I have been friends since 2010 when I initially moved to Berlin and spent my time documenting the rise and fall of the ArtHouse Tacheles. His approach that Art must be available to all the people and his unbroken spirit to make it available to us has inspired me and my work in many ways. I am a dedicated collector of Ludwig Ebens Art and I hope that you will find something for yourself here too.

If you are in Berlin 11th of January 2020 - Take this as our invitation to meet the artist in person at the finisage of his currenct exhibition in the OKK creative space in Weddings Prinzenallee Nr. 29. The Event begins at 7pm. free entry, and drinks. 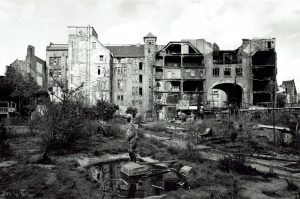 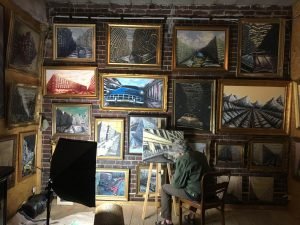